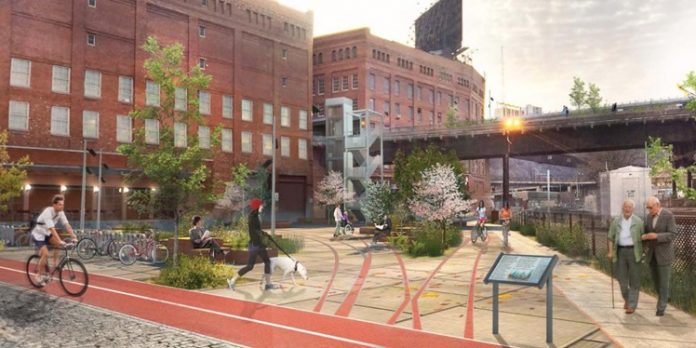 On April 19, Pennsylvania Gov. Tom Wolf and local officials joined McKnight for a ceremonial groundbreaking. The project, called The Highline, involves the reuse of the nearly 1-million sq. ft. Pittsburgh Terminal Warehouse and Transfer Company building into a creative, modern office and retail complex. It will include 500,000 sq. ft. of office and 100,000 sq. ft. of retail space, in addition to a 500-ft. landscaped elevated walkway.

The rehabilitated complex will be made available to a wide range of tenants, including new economy innovators, businesses, and artists seeking affordable creative space, and will include office and light industrial space, creating new public spaces and riverfront connectivity. The public space improvements along the river will include a public walkway and river overlook, a bicycle hub, and new connectivity from East Carson St. to the Monongahela River below.

The project is expected to generate at least 242 temporary construction jobs. Another 254 indirect jobs and 674 induced jobs will be supported through construction spending.

Construction is expected to be completed in 2019.