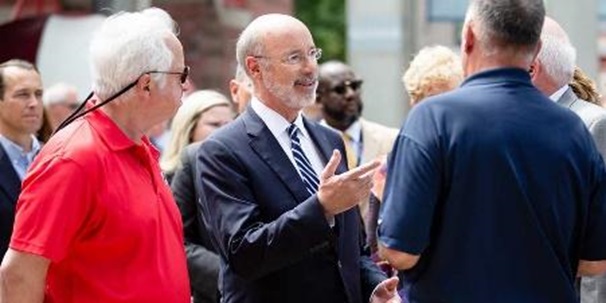 The projects include the revitalization of historic buildings, libraries, streetscape improvements, increased pedestrian access and trails, and the expansion of job creation opportunities.

The Redevelopment Authority of the County of York was approved for a $1.4 million grant for the revitalization of 34 Frederick St., a historic building in downtown Hanover. The first floor will be completely transformed to house an upscale restaurant. The second floor will become 14 market-rate housing units.

Keystone Kidspace was approved for a $2 million grant to reuse the historic York Armory located at 369 N. George St. in downtown York. The Armory will be reinvented as a dynamic and accessible program and gathering space. The significant site improvements will provide access to the Rail Trail, enhance the streetscape, and connect visitors with the Codorus Creek.

Magnesita Refractories Co. was approved for a $3 million grant for the construction of a new facility and related infrastructure to house and operate the new crushing equipment, including concrete foundations and structural steel for Magnesita’s York facility.

The York County Industrial Development Authority was approved for a $2 million grant to support the complete rebuilding of the original Yorktowne Hotel. Interior rooms will be reconstructed; lobby, ballrooms and public areas will be refinished and restored. All utilities and systems will be replaced, and the project will be brought to current codes with the addition of ADA compliant ingress and egress as well as sprinklers and alarm systems. Back-of-house areas will be brought to current standards and codes. A rear plaza will be developed which will allow for safe and compliant guest drop off and loading. Zion Church will be tied in as part of the campus development.

York County Economic Alliance was approved for a $5 million grant for the Codorus Creek Beautification Initiative which seeks to create pedestrian access and greenways along the Codorus Creek channel in the City of York. This would be accomplished by the construction of streambank stabilized improvements and replacements that will improve and protect the infrastructure elements to better manage storm water thus improving the ecological health of the Codorus Creek Watershed. New pedestrian trails and points of access to reconnect the residents of the City of York to the Codorus is a primary goal.

York County Libraries was approved for a $1 million grant to renovate Martin Library by updating public restrooms, replacing decades-old sliding doors in the children’s department, and completing building weatherization, interior renovations and space design enhancements. Also, Kreutz Creek Valley Library will acquire donated land from Hellam Township for construction of a new library building and Kaltreider-Benfer Library will double the size of the existing facility by building on the adjacent concrete pad area to create space for the children’s library, teen center, and private study area.

The Fortress Initiative was approved for $6 million to support a community revitalization and economic development project in York County known as The York Plan 2.0 Innovation District in the northwest corner of the city, part of a larger project to revitalize this area into a manufacturing, technology, history, arts, and education district.

Rehabilitation of Big Oak Road bridge to begin next month